There are many plugins for WordPress that allow you to enhance the appearance of your post and pages with tabs, accordions, lightboxes and similar elements that reveal content selectively. If you want to use H5P content inside these elements, the H5P content may not be displayed however.

This issue may be caused by giving the content that’s hidden the height of 0 pixels – so the H5P content is there, but it’s invisible. When you switch tabs, open an accordion element, etc. and then expect the content to show up, H5P would have to be informed that there’s more space now and that it should resize. Unfortunately, the other plugin would have to tell H5P, and it’s quite understandable if other plugin developers don’t want to have some extra rule for one arbitrary other plugin like H5P – what if other plugins come along that need some special treatment for themselves?

There’s a workaround that I created in my free time. It’s a separate plugin. Using it and its source code is absolutely free. I don’t want any money from you. However, if you like this plugin, I kindly ask you to make a one-time donation of 2.50 EUR to the Rainforest Coalition — or more if you can afford to.

What does the plugin do?

The plugin is just a workaround. It tells H5P content to resize regularly in a time interval that you can set instead of the other plugin telling H5P to resize once it should. You can easily guess that this is not a perfect solution. H5P will be told to resize way more often than it needs to, and H5P content may be displayed with a slight delay that’s defined by the time interval. It defaults to half a second. You cannot make the interval too small however, because then H5P would be told to resize too often, and the user’s browser might stall. Oh, and of course the plugin will not solve the H5P-not-being-displayed issue if it’s caused by something else.

How to get the plugin?

The plugin is called SNORDIAN’s H5P Resize Pulse. You can install it via the official WordPress plugin repository or download it from my github repository. The source code is openly licensed, so feel free to remix and repurpose it.

Oh, and please don’t forget: If you like this plugin, I kindly ask you to make a one-time donation of 2.50 EUR to the Rainforest Coalition — or more if you can afford to.

You have some other H5P related issue?

Feel free to get in touch if you have some other issue with H5P that you need to be solved. I am an IT freelancer that will gladly help you to use and enhance H5P.

One of the shortcomings of the H5P plugins currently is, that they do not allow to display user scores in posts or pages. Users will have to log in to the backend. Log in? Yes, some other shortcoming is that scores are only saved when students are signed in to the host system. But …

You knew there was going to be a ‘but’, didn’t you?

But the university of Freiburg in Germany took the initiative and let me develop a WordPress plugin that closes this gap.

The plugin was named H5P User Score and adds several shortcodes that you can put into posts and pages, and those will be replaced by the user’s previous score (absolute and a percentage) and the maximum score of an H5P content type.

Let’s say you have an H5P multiple choice quiz with ID 17 available for your site’s users. Assume the current user scored 5 points while the maximum possible score is 10 points.

On any page or post (not limited to those where the H5P interaction is available), you could e.g. write:

On the page or post, this would render as

In the multiple choice quiz, you scored 5 points out of 10. That’s 50 percent!

In contrast to common scoring, users won’t have to be signed in to WordPress. Their scores will be kept in the browser’s local storage, so as long as users don’t use a different device, they’ll be able to see their previous scores.

How to get it?

Unfortunaly, you will not find this plugin in the official WordPress plugin repository. The university of Freiburg cannot guarantee support and neither can I for yet another piece of software that I created as a contractor. Since there’s no support, the WordPress team won’t list the plugin. But … Here’s a ‘but’ again … But the  source code is openly licensed and published, and you can download the plugin from github and install it yourself by uploading.

Earlier this month I was at the first OERcamp Werkstatt close to Berlin, Germany. The event was something like a hackathon with the aim to create and publish open educational resources. My task was to advise the participants on H5P and LearningApps.

Both H5P and LearningApps are tools that enable you to create interactive content on the web. I think H5P is superior by far for a number of reasons, but LearningApps has some nice features, too. For example, teachers appreciate that under each of their contents they can see a URL that leads directly to the content. They can easily copy and forward that link. There is also a QR code for the same purpose. You can download it or enlarge it and use it directly to share the link. After I introduced H5P to some teachers last week and they asked me how to get the link for sharing (within WordPress), I had to do something 🙂 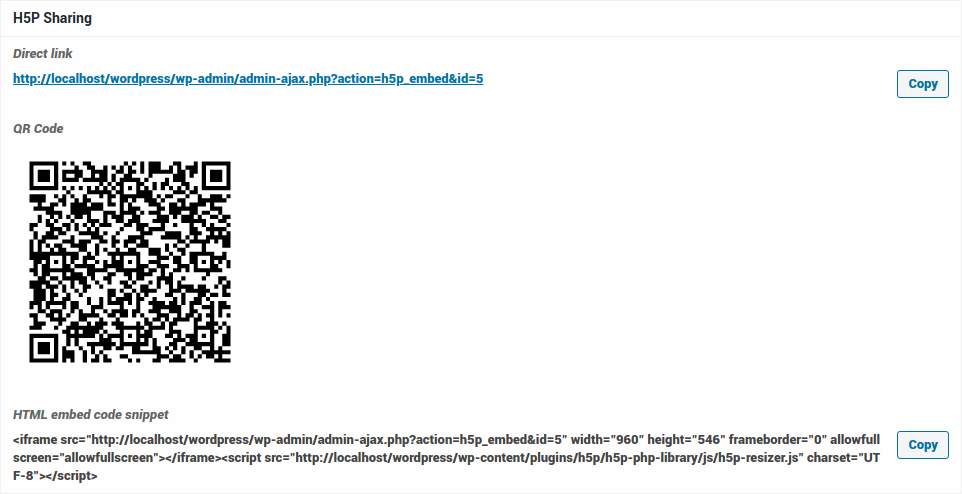 On Monday I released a small plugin called H5P-Sharing, which adds some flavour to the H5P plugin for WordPress. Content authors now have the opportunity

That’s all it does. But it could do more:

If you want to, you can take the source code and extend the plugin, but of course you can also hire me for creating new things related to H5P. Don’t be shy and get in touch!